Beyond Horizontalism and Hierarchy

How can we design decision-making frameworks and share power in more nuanced and effective ways in our movements?

In recent years there has been an explosion of interest in agile and decentralised approaches to self-organising structures, drawing on systems thinking, information theory, and notions of agility. In the Organisations Revisioned training at Ulex we explore how some of these approaches have revolutionised practice and can be harnessed within social change organisations to build resilience and impact. In October 2020 two of the Ulex training team – Gee and Ella – joined Merab Ingabire from Solidarity Uganda to offer a group of organisers from around the world an online workshop exploring the theme of Beyond Hierarchy and Horozontalism.

In the article below originally published by Global Platforms, Phil Wilmot, co-founder of Solidarity Uganda, shares some of his take-home points from the workshop aimed at supporting movements to share power in more nuanced ways. 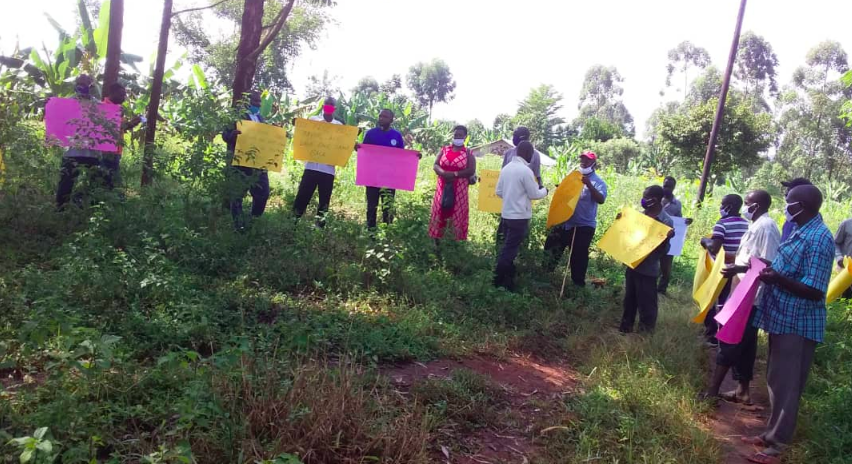 Organisations play a central role in supporting individuals and groups to come together to learn, act and have an influence towards social, economic and environmental justice. When they work well they multiply our influence, they channel energy, and they promote creative and innovative action. Yet organisations face numerous challenges from sustaining themselves financially, to dedicating time to reflection and learning, and to managing diverse points of view and skills.

Many grassroots organisations reject hierarchies in favour of flat structures and systems, but can suffer a loss of responsiveness, continuity and scope for innovation. New approaches to organisations can help solve those problems. Others theorise about swarming and the power of non-linear dynamics, but often fail to apply them beyond critical moments of spontaneity.

The right balance of structure can enable agility and spontaneity, whilst supporting longer term purpose. More traditionally hierarchical organisations often seek to benefit from adopting new self-management methods (like those explored in Frederick Laloux’s Reinventing Organisations), but too often applying these approaches merely mask the old hierarchies. The Beyond Hierarchy and Horizontalism workshop explored these challenges, gave an overview of the field, and aimed to build confidence and understanding to support organisations to evolve into agile, resilient, effective networks able to embody their values.

Many organisations rely upon and thrive from successful collaborations or partnerships, and social networks and social media are supporting even greater connectivity between organisations. These connections form an important part of strategies for resilience when societal, economic and environmental challenges are deepening.

I have had the privilege of training all kinds of alliances: labour unions, student groups, NGO coalitions, informal community groups. I’ve witnessed so many powerful organisers traveling the path to victory, only to be derailed by their own leadership. In these (annoyingly common) instances, members shift their focus from the target of their external enemies – a government or company, for instance – to their own group’s leaders. In such moments, movements usually hit the pause button on their goals until they can straighten out their internal mess, thus sacrificing the momentum they had built for their cause.

Every group and structure uses some combination of personal agency and collaborative teamwork to make decisions.

I have also been a member of activist groups where the aversion to hierarchical leadership is so strong that a simplistic sense of “we make decisions together” sets in, without the structure for that joint decision-making to actually flourish. Without the deliberate creation of values, group culture, and process, the members of the group with more power (say, based on gender, age or experience) invariably seize control. Sometimes this capture of power within a group is deliberate, and sometimes it is accidental. But in all cases, it stifles the emergence of collective power.

In the words of Gee from Ulex, as described in our 2020 report on Sustaining Social Movements: “It always seems to be the case that there are small groups of people pulling the strings, themselves in denial that this is going on.” This culture of denial of hierarchical elements and disparities of the privilege at play within the group gives way to a kind of fetishization of horizontalism. A group’s more powerful members exploit the lack of structure in the very name of inclusivity to concentrate more power around themselves.

So how do we make decisions together, despite these internal challenges in our movements?

In answering this question we start with acknowledging that there are more than two types of structures. We do not have ONLY hierarchical and horizontal models. Every model falls somewhere in between these polls. A vertically-organised corporation, for example, may have an employee or client complaint desk to solicit feedback from stakeholders in the company. Every group and structure uses some combination of personal agency and collaborative teamwork.

Asking whether we want to form hierarchical or horizontal groups is a question likely to derail us into the tyranny of structurelessness. I have often been wrapped up in unhelpfully polarized conversations about whether the “NGO model” or “movement model” is the right structure to adopt to make change. Neither “model” tangibly exists. Each has countless sub-types. There are NGOs that are more member-led than some movements, and movements that are more authoritarian than NGOs operating under the leadership of an executive director or CEO.

Ella from Ulex guided organisers through seven (non-exhaustive) styles of making decisions. In any movement or group, tasks may be decided in a number of ways, as illustrated: 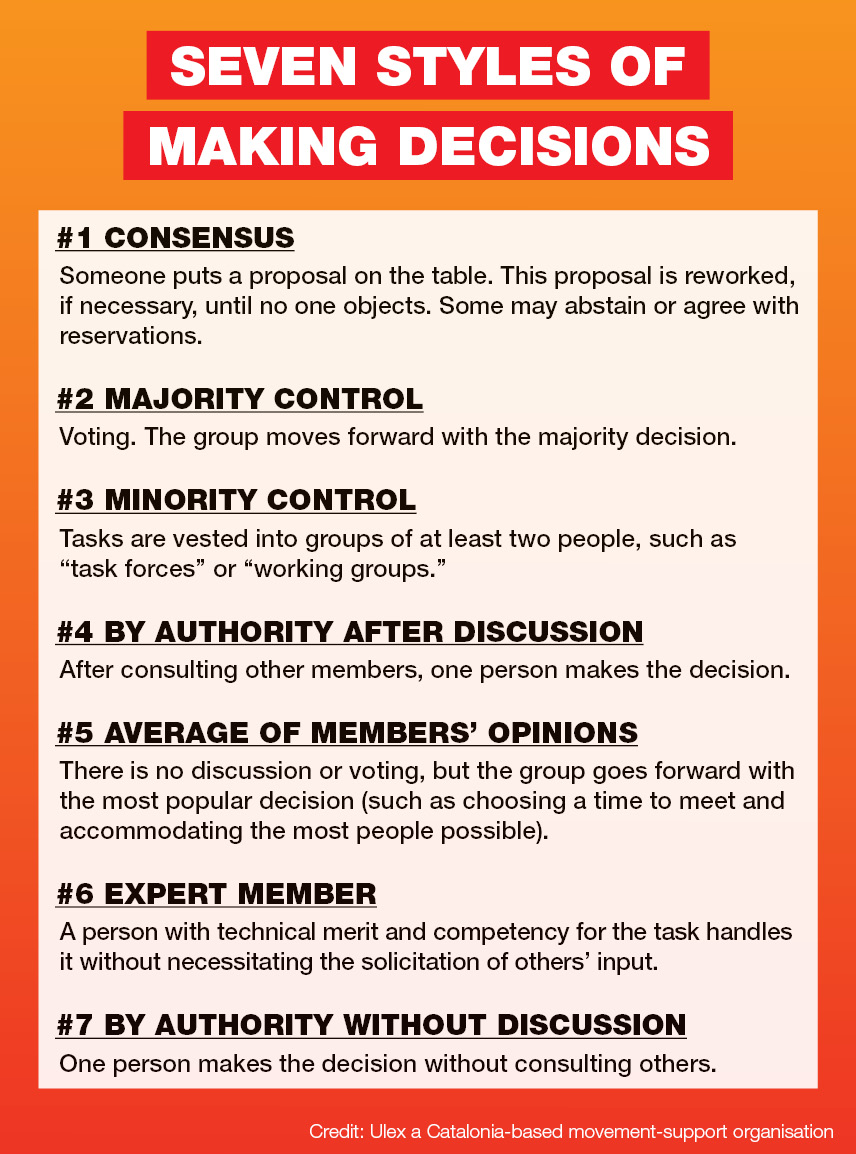 Movements, organisations, banks, armies, sports teams, supermarkets: groups across diverse contexts use all or most of these approaches, often simultaneously -and not always consciously. Movements have the burden of creating MORE structure – not less – to deliberately empower decision making in ways that are strategic, expeditious, inclusive, and scalable, based on their objectives and circumstances.

To use an extreme illustration, if your movement is organising a protest where police brutality is anticipated, it is unlikely that protesters will stop in the middle of their action to build consensus on whether and how to treat an injured member. Rather, that power might be vested in an expert with a medical degree or a working group that has gone through first responder training.

An executive director of an NGO might find it wise not to accept a grant by her own authority without discussion, but rather consult staff before making the decision, or perhaps solicit their green light and programmatic amendments through a consensus process.

To achieve their goals, groups must develop nuanced decision-making systems and cultures. There is no one-size-fits-all horizontalism. Sharing power through processes deliberately built for the group’s objectives and context will increase the group’s chances of success.

This article was originally published by Global Platforms on November 13, 2020. Written by Phil Wilmot. Link to original article here.

READ ON: The Power of Activist Education»»»