It is not just through the application of nature connection that makes the approach radical. It is also the way we situate it within a radical political framework that informs the way we practice our nature connection work – with an anti-oppressive, decolonial approach, coupled with a call to collective action.

There is a danger that nature connection work can end up replicating the individualistic, narcissistic tendencies of contemporary Western society and the interlocking systems of oppression that underpin it. Without embedding nature connection work within a radical critique of systemic oppression, it runs the paradoxical risk of reinforcing the very systems, structures and perspectives at the root of our disconnection. Our attempts to dismantle systems of harm should be informed by our ability to respond and grow, so we bring awareness to the privileges and oppressions we experience and how we bring these into our work.

Mainstream nature connection is often presented in an apolitical framework, without any critical reference to why it is needed. But it exists in a specific cultural context: The political economy of ecological degradation and disconnection, and centuries of colonisation and domination. ‘Nature’ is often framed as a separate entity from human consciousness and culture to go out into and ‘connect with’. But of course, ‘nature’ is not simply culturally constructed, and, in a sense, we can never be truly disconnected from it. Homo sapiens are part of the whole Earth system as much as dandelions, birdsong, beetles and rainforests. You can’t fall out of the web of life. However, the language of ‘nature’, and our (psychological, emotional, spiritual and physical) connection to it is a useful shorthand to discuss our relationship with the rest of our earthly kin and how deeply we are honouring them, so we choose to continue using the term where it is helpful. 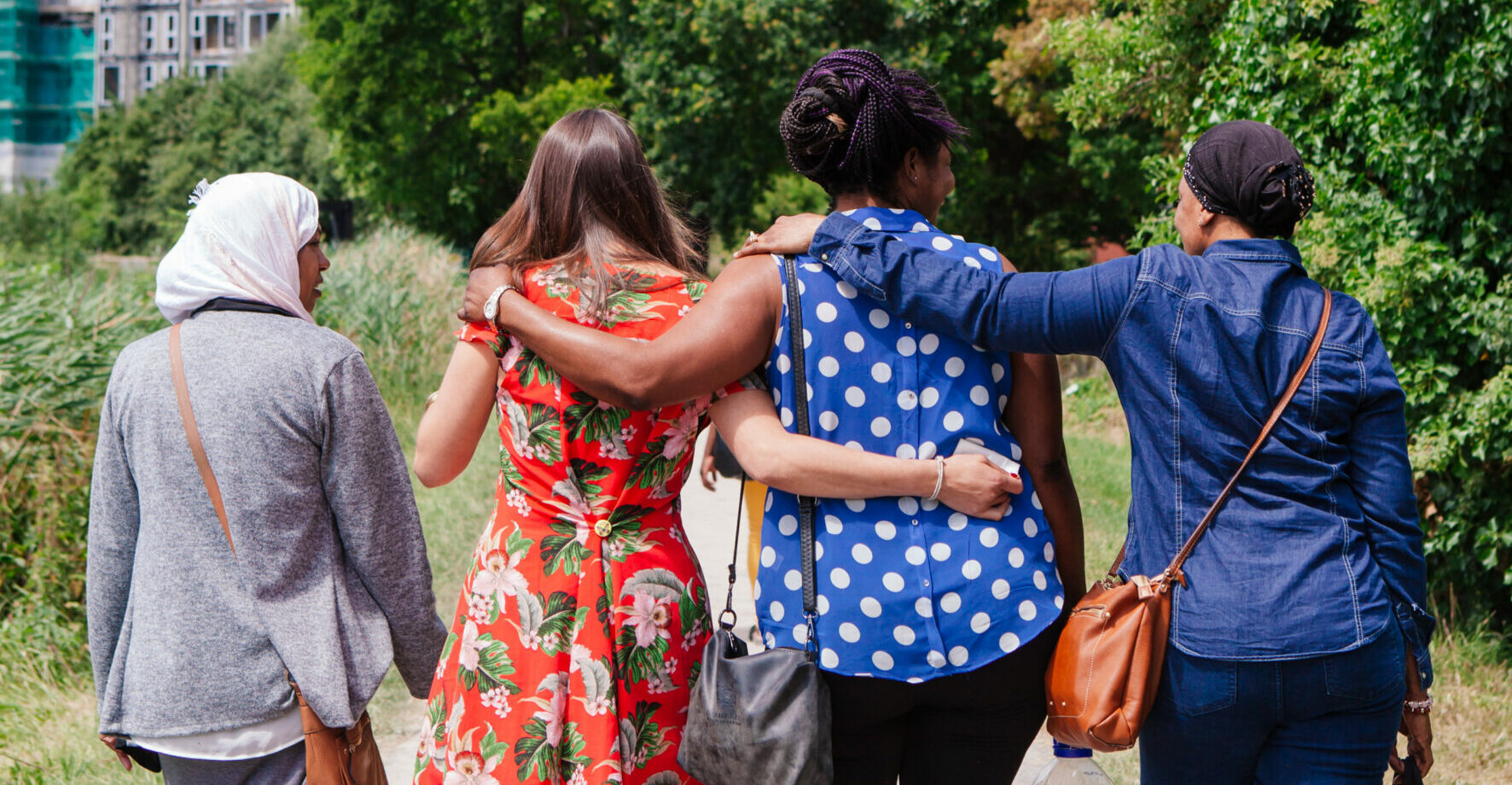 It is a mistake to assume that the division between humans and nature is a universal condition. In fact, this disconnect is a culturally specific phenomenon of urbanised Western society. For many traditional rural and indigenous communities, being ‘connected to nature’ is just everyday life; ‘nature’ is the world which we are part of – a worldview that the dominant Western worldview has systematically marginalised and destroyed.

Since the Neolithic revolution and the subsequent replacement of more nomadic, foraging ways of life with agriculture, domestication and settlement, these ways of life have spread across most of the globe, often violently. In many ways, our relationship with the world around us has increasingly become one characterised by domination and estrangement from the non-human, and the belief that we are somehow above and superior to nature. From the monotheistic religions that arose from agricultural and pastoral societies, and the newly hierarchical and patriarchal societal structures they reflected, through Greek rationalism and the reductionist thought of ‘enlightenment’ science, to the rise of capitalism and the industrial revolution which involved mass urbanisation and the violence of colonialism, the worldview of human-centric and domination-based social structures have come to eclipse diverse and alternative ways of living. All of this is compounded in the current trends of increasingly intensive agriculture and globalised consumerism. Seen through this lens, the last 10,000 years are a story of growing disconnection between the human and non-human.

One way to refer to the cumulative effects of this historical process, underpinning the dominant of socio-political system of today, is as Empire. It is a system of power that exploits and administers life in an attempt to render everything profitable and controllable. Empire encompasses the interlocking systems of settler-colonialism, white supremacy, the state, capitalism, ableism, ageism, and heteropatriarchy. It is not a static thing, but a complex tangle of processes, tendencies and structures which separate people from their capacities, power and creativity, and their ability to connect with each other and their worlds. As powerfully described in Joyful Militancy, Empire is ‘the organized catastrophe in which we live today’.

Empire severs our relationships with our human and non-human communities, making us dependent upon it to meet all of our commodified needs – from food, shelter and basic healthcare to meaningful connections, our identities, and caring for our elders.

Seeing in this way, we recognise that the alienation and the disconnection we feel is deeply political.

It follows that our reconnection with nature and each other is also deeply political. It involves reclaiming these relationships and capacities, to untangle ourselves from the grip of Empire’s entrapment and re-entangle ourselves in the web of interdependent life. It is an essential part of decolonisation, of anti-capitalist resistance, of designing ecologically regenerative economies, of progressive social change away from Empire and towards collective liberation.

If we fail to recognise the inherently political dimensions of disconnection from nature and the political power of reconnecting with it, we also obscure the basis for understanding environmental injustice. The nature of our relationship with the non-human is affected by our race, class, gender and sexual orientation to mention but a few, as the distribution of environmental benefits and burdens is not equal. The global north, especially the former colonial powers, are historically most responsible for producing polluting emissions, but it is black, brown and indigenous people in the global south that will be most impacted by the consequences.

These injustices are sometimes reflected in the world of mainstream nature connection. Disconnection from nature affects our health and happiness but these effects are not felt equally, and opportunities for connection are not available equally. In the UK those with racial and economic privilege tend to enjoy greater access to (also higher quality) green space in the areas they live, which are also less likely to be highly polluted. They are often more able to travel to other scenic locations or pay for a ‘nature connection’ course. Such courses are often predominantly attended by white, middle-class, heteronormative people, making them uninviting or even unsafe for others from more marginalised communities. These advantages translate into many of the associated benefits gained from connecting with nature.

Without a conscious coupling with cultural context and action (which extends beyond individual lifestyle changes), apolitical nature connection experiences can easily become mere entertainment for the more privileged, who afterwards return to largely unexamined lives. Nature continues to be a thing to be consumed, and the exploitative relationship with it is perpetuated.

There are also problems within mainstream nature connection work related to cultural appropriation. Many nature connection practices and models are rooted in indigenous knowledge and culture, which practitioners often benefit from without acknowledging this (whilst crediting the white Westerners that have popularised them), or showing solidarity with those cultures who are often marginalised, oppressed and – perversely – denied access to their own intact culture.

And so, paradoxically, efforts to ‘reconnect people with nature’ can end up reinforcing the systems of oppression and disconnection at the root of the problem they intend to solve. So, how we do it matters. An approach that isn’t explicitly anti-oppressive is complicit in Empire’s oppression.

RNC IS GROUNDED IN SOLIDARITY

RNC explicitly locates itself within a radical analysis of the socio-political context that underlies the disconnection. It expresses a commitment to anti-oppressive, decolonial practice and is uncompromisingly coupled with a fierce call to collective action. It is both a challenge and an invitation to nature connection practitioners, facilitators, educators and advocates, and an attempt to collectively develop an approach that disrupts and dismantles systems of oppression and disconnection. The transformative power of solidarity is at the heart of the RNC approach.

Our relationships with nature, ourselves and each other inescapably influence each other. As long as white people oppress people of colour, settler-colonists oppress indigenous peoples, the cis-hetero oppress the queer, and humans oppress non-humans, oppression and domination will poison all of our relationships. In the end, as Dr. Martin Luther King Jr. said: ‘No one is free until we are all free.’

For us, a personal sense of connection with nature on its own is not enough. Real connection finds expression in solidarity. Through solidarity, energy and capacity becomes directed towards the collective good. ‘Nature connection’ that does not result in meaningful acts of inter-species solidarity is still a state of alienation. When we really connect with the web of life, we see through the false constructs of the atomised self and human exceptionalism, to our true identity as a part of nature. We are called to act in solidarity with life. This may take the form of tending plants or tending our communities; critical reflection allows us to take critical action, going beyond individualistic lifestyle choices to building our capacity for collective action for systemic change.

Find out more about Radical Nature Connection (RNC) on the following pages: