Narrative is fractal : Why we need more than words to truly face racism

In the first of a series of profile pieces on Ulex project partners, we’re highlighting the excellent work of the Public Interest Research Centre (PIRC) in Wales. PIRC is an independent charity which works to help movements – for equality, anti-oppression, and environmental justice – to tell better stories for a different world.

PIRC believe our society is built on stories. Stories – of our past, present and future – which provide the scaffolding for our political systems, our social structures, and our own thinking.  Effective strategies for social transformation involve the contest for how we think, how we see, and the stories we tell about our world. New stories, new thinking, help new worlds come into being.

PIRC’s aim is to strengthen the capacity of our movements to map, reframe and create narratives that will change society and, particularly, to provide support to lower-income and grassroots groups with limited financial resources, who often find themselves excluded from this kind of framing work. The charity facilitates workshops and provides training, conducts  participatory research, and produces resources and materials that make the framing process accessible, easy to understand and enjoyable.

Since 2018 PIRC and the Ulex Project have been working in partnership to design and deliver a series of trainings which focus on  Framing, Narrative and Story-Based Strategy, with an emphasis on the role of framing in work on climate justice and tackling the rise of the far right in Europe. The training draws on PIRC’s work on Framing Equality, Framing the Economy, and their recent Framing Climate Justice research project.

Elena Blackmore currently leads the Framing LGBTI Equality project at PIRC. Before that she was involved in a number of their previous publications, including Common Cause for Nature, Valuing Equality, the Common Cause Handbook and Building Bridges (on the framing of human rights in the UK). Elena is most interested in how our cultural stories shape oppression and the ways we interact with each other and the natural world. The article below was written by Elena in June 2020 shortly after the murder of George Floyd and the tide of Black Lives Matter uprisings that were sparked in response. 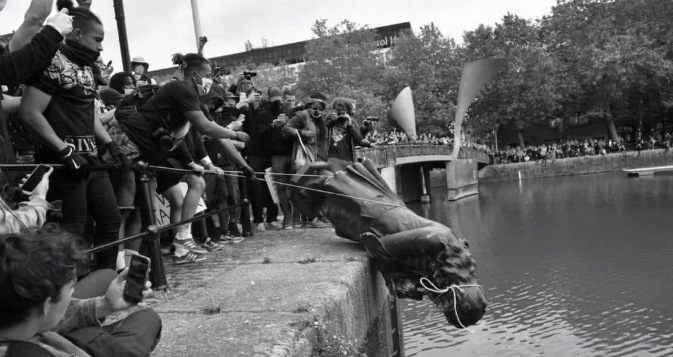 Narrative is more than words

He will never see her grow up, graduate. He will never walk her down the aisle.
Roxie Washington, mother of George Floyd’s daughter

I don’t think many people truly believe the old sticks and stones adage anymore. But working in the world of framing and strategic comms, it’s easy to take it to the other extreme and believe the power of words to be paramount. But words are just one vehicle for the meaning we extract from and use to shape our lives.

What causes my gut to wrench and the grief to wrack my body when I hear of the killings of George Floyd, Breonna Taylor, Ahmaud Arbery, Tony McDade is, only in the simplest of senses, caused by the words I read on a screen. The immediate pain lies in the stories themselves, located beyond the words: the brutal events, the violent interplay between the characters, the horror of the ending. The lives taken: the whole, messy, beautiful humans who will never again walk through their front door or laugh or hug their loved ones again.

And each of their stories is another tile in an incomprehensibly vast mosaic of a narrative that taps into a deep well of familiar pain, a dull ache that I’ve held for as long as I remember.

This is the narrative mosaic of white supremacy and it comprises hundreds of years’ worth of tiles of violent history. We can understand a narrative in this way: as a ‘coherent system of stories’ (Centre for Story-Based Strategy). The white supremacy narrative is a simple but clear one: it posits that there are white people and non-white people; the white people are the default—normal, valued, attractive, worthy—and the non-white ones are the transgression. The narrative tension lies in the ongoing, epic and often lethal struggle of non-white folks to prove themselves to be of worth. (This is the abridged version, of course: there are many competing, complicating and compounding factors that dictate how worthy we deem folk to be. But it holds a deeply-felt truth nonetheless.)

The story I read in the news is of a far away violent event, without justice. But the narrative that I understand is that black people, black bodies are not valued, are not deemed worthy. The truth that I feel is that I am not worthy. Hence the simple but radically disruptive potential of the frame Black Lives Matter, and the searing joy of seeing the folks on the street, the physical expression of belief in worth.

Who taught you to hate the texture of your hair?
Malcolm X

The narrative is ubiquitous. It is in the Hollywood stories with the token character of colour (who is two dimensional, a humorous or tragic prop, the one who dies). It is in the news stories in which white suspects are treated better than black victims. It’s in the kids stories or the long-running British TV favourites with no black characters (the ‘last bastion of Englishness’). It’s in Eurocentric beauty standards in advertising, and the whitewashing of the story of who has borne the burden and the brunt of the pandemic. It’s the number of black people who die in police custody, not just in the States but here in the UK, without a murmur of public concern, let alone convictions. It’s the two months it takes for charges to be brought against violent white men who hunt down and kill a man out running. I don’t need to go on.

But it’s not just out there. It’s not just those racist people. We are all constantly placing tiles in the narrative mosaic, and without conscious effort, we’re likely to be recreating the same old familiar patterns.

Take, for example, the lack of diversity in the sector I work in: the charity sector. The sector most explicitly focused towards equality and justice, but failing to represent those it seeks to serve within its own ranks. Anecdotally, in my experience, the comms and framing sub-‘sector’ I work in suffers the same problem. No, it’s not about black faces in high places. But what story are we ‘storytellers’ telling as a majority white, middle class group, writing the framing strategies for racial or migrant justice? The words are almost irrelevant.

Or take the uncomfortable truths I am facing about myself, week on week, as I work through Layla F Saad’s Me & White Supremacy workbook with a small group of friends. The internalised beliefs I am heartbroken to recognise are inextricably linked to the violence I see.

The narrative of white supremacy is not something out there.

It is made up of infinite individual and collective stories: daily actions, lives lived, our organisations and careers, the media and culture we engage with, what we buy and who from.

How do we change this narrative?

In Emergent Strategy, adrienne maree brown asks us to think fractal: “How we are at the small scale is how we are at the large scale… Grace Lee Boggs articulated it in what might be the most-used quote of my life: ‘Transform yourself to transform the world.’ This doesn’t mean to get lost in the self, but rather to see our own lives and work and relationships as a front line, a first place we can practice justice, liberation, and alignment…”

So just as each violent story is part of the broader narrative of white supremacy, we can live and act the story of liberation ourselves.

The times are urgent, let us slow down.
Bayo Akomolafe

Brene Brown talks about the first step in changing our stories as the reckoning: getting stuck into how it feels.

Shilpa Shah notes that the narrative, the trauma, is embedded in our nervous systems. As Ayeisha Thomas-Smith says, particularly for folks of colour: “Run, yell, cry, sing, dance, just let this pain be in your body or move through it in whatever way feels right. Give yourself space to let that happen.”

Thanks to Ayeisha for this playlist too. I’d also recommend adrienne maree brown’s selflove twerkout or Beyoncé’s Lemonade.

The next step is to challenge the narrative: looking for the roots of the beliefs you hold and the stories you tell and facing them head on.

I’m eternally grateful for the labour of these amazing women of colour that has gone into resources such as Rachel Cargle’s Great Unlearn, Reni Eddo-Lodge’s Why I’m No Longer Talking to White People About Race (and her podcast About Race) and Ijeoma Oluo’s So You Want to Talk About Race. And particularly for white folks and people with white privilege, I’d highly recommend Layla F Saad’s Me & White Supremacy. Don’t just read it, though: do it. It’s uncomfortable, painful, and needed.

To grapple with the creation of these narratives, listen to Seeing White and The Land that Has Never Been Yet for a powerful US-perspective or We Need to Talk About The British Empire to get stuck into the elephant in the room for us Brits. The current season of Dissect, delving into the meaning of Beyoncé’s Lemonade, is truly healing for me right now: I felt myself crack open as they talked about the disruptive force of accountability.

If you work in an organisation or organise in a group, the time to take a long hard look at your collective narratives—from your external-facing comms to the inner truths of the structures, dynamics and voices that are heard—was yesterday. At an individual and organisational level, think about where your money is going. Whose work (lives) do you value?

Now is time to invest in the new narrative.

Show, don’t tell, that you value people of colour. There are plenty of groups who need your support, if you are able. Currently, Black Lives Matter, Official George Floyd Memorial Fund, NAACP Legal Defense Fund need support for the ongoing protests in the US. In the UK, support organisations such as the Racial Justice Network (thanks to Penny for this blog and suggestions for action too).

Seek change within your organisations and the groups you’re in: as How Matters argues, we should: “Call for an end to all white boards and all white leadership… Call attention to whose knowledge, expertise and experience is undervalued… Be an unapologetic advocate for the redistribution of financial resources.”

But think about your words too. For strategies for rethinking our framing and communications, check out this from Topos, this from Color of Change, No White Saviours, this from the Race-Class Narrative Project, and this from Runnymede & Voice4Change England. Challenge episodic framing of racial injustices.

“Be an unapologetic advocate for communications that do not center whiteness in the world. Africans and people in the Global South have been calling for the white savior narrative/industrial complex, and bridge characters to be retired for eons. This matters because this is how stereotypes, generalisations, victimisation, exploitation, and heroism are exposed, challenged, and healed.”—How Matters

Teach kids about race. Like, now. Some book suggestions; some podcasts on how to have the conversations here, here and here.

And when you’re ready, watch this from Emmauelle Andrews & team and read adrienne maree brown’s Pleasure Activism to lay the tiles* of a new narrative in which you are truly worthy and deserving of wholeness, pleasure and joy.

If we’re going to heal, let it be glorious.
Beyoncé / Warsan Shire

* Thanks to Narrative Initiative for the beautiful tile / mosaic metaphor.

This article was originally published by PIRC on June 8, 2020. Written by Elena Blackmore. Link to original article here.