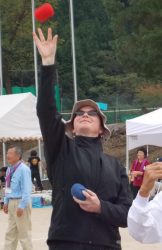 Based in Valencia since 2016, Didi has over 20 years experience facilitating learning about social justice and organising with others to take action in diverse settings – everything from the formal classroom to popular education-style beneath trees.

An activist since her teens, it was while working as a lecturer in Peace Studies in Japan that Did began to weave together her commitment to social justice with interest and love for teaching/learning. In Japan she worked with women’s rights groups organising and following up on the 1995 women’s conference in Beijing, ran trainings for humanitarian and development NGOs, and was involved in the Korean-Japanese Citizens’ Civil Rights movement . This community work led to doing human rights observation and accompaniment in the conflict zone in Chiapas (Mexico), and facilitating exchange visits between US and Mexican activists. After six years in Mexico, she moved to London where she worked for Quaker nonviolence training programme Turnning the Tide and other organisations both locally and internationally running courses and accompanying groups’ campaigns. Since 2016 she is part of the Ecodharma Ibérica team facilitating workshops about effective group-working and personal sustainability for grassroots groups based in the Spanish State and the Ulex Project. Didi also continues Zapatista solidarity work with the UK Zapatista Translation Service and the Don Durito Collective. She is passionate about the right to freedom of movement and urban food-growing. In Valencia she collaborates with Valencia Acoge, a local organisation doing migrant and refugee support work, and L’Horta el Cabanyal, a collective garden on reclaimed land.